Zuzanna Szadkowski in THE MERRY WIVES OF WINDSOR at TRT

The TRT production of The Merry Wives of Windsor will explore the darker undercurrent of one of Shakespeare’s silliest comedies. In the play, the lecherous buffoon John Falstaff (perhaps Shakespeare’s greatest comic character) decides to seduce both Mistress Page and Mistress Ford, respectable married women of Windsor. When the two women immediately see through Falstaff’s plot, they decide to turn the tables on him and devise a plot of their own-for hilarious revenge.

Broadwayworld.com interviewed Zuzanna Szadkowski who plays an Actor in Merry Wives of Windsor about her career and the upcoming show at TRT.

Szadkowski played Dorota in the CW’s hit drama series Gossip Girl. She can be seen as Nurse Pell on the Cinemax series from Steven Soderbergh, The Knick. Other television credits include The Good Wife, Elementary, Girls, Guiding Light, The Sopranos, Law & Order, and Law & Order: Criminal Intent. Film credits include Growing Up and Other Lies, Loserville and Butterflies of Bill Baker. Theater credits include The Comedy of Errors as part of The Public Theater‘s Mobile Shakespeare Unit, Nora and Delia Ephron‘s Love, Loss and What I Wore Off-Broadway and on tour, and The 39 Steps at Actors Theatre of Louisville. She received a B.A. from Barnard College and an M.F.A. in acting from the A.R.T./MXAT Institute at Harvard.

When did you first start acting?

I started acting in sixth grade. I was in the chorus of Kiss Me Kate at Blackhawk Middle School in Fort Wayne, Indiana. I was hooked the minute they brought out the stage make-up.

What performers do you admire?

I am a huge fan of Laurie Metcalf. She blows me away on stage, but I’m especially in awe of her work on the small screen. Her timing, the specificity in her work, the layers of heart and heartache under the skin of her characters – all of that inspires me to pieces. Roseanne! Getting On! She’s amazing. I also am crazy about the transformative John Hawkes.

You have diverse performance credits. What have been some of your most challenging roles?

I have been most challenged performing Shakespeare’s comedies. It’s been a tall order to find an honest way to connect to an audience from inside some of the broader characters I’ve played. For example, I had a heck of a time cracking the Abbess in Comedy of Errors when I performed with The Public Theater‘s Mobile Unit. It wasn’t easy to figure out who she was and what could be funny. On the other end of the spectrum, I find guest starring on television often challenging. When I worked on Gossip Girl for six seasons, or The Knickfor two seasons, I had time to grow with the show, to develop my character and to build chemistry with my scene partners. Sometimes fleshing out a role and delivering a performance when you are dropped into the world of a series as a guest star for only a day or two is pretty scary.

Tell us a little about your role(s) in Merry Wives of Windsor.

In Merry Wives three actors take on the whole story. We are all over the place switching in and out of roles. I think it’s going to be as surprising for the audience as it is fun and crazy for us to juggle. I have never felt so deeply connected on stage to the other actors. Jason, Nicole and I have to function almost as one organism. I have to tell you that these two are hysterically funny and brilliant actors – working with them we discover new aspects of the characters and relationships every day in rehearsal, and I think we are building something special.

TRT is a beautiful theater, and we are made to feel very taken care of. The people working in this theater are truly inspired. It is very cool to be asked to make something brand new and personal of something classic. Also, Red Bank is a happening town, and it’s fun to be working so close to NYC.

What would you like metro area audiences to know about the show?

I would like audiences to know that we are very excited to show them our Merry Wives.We have been working to find the lives of these characters and to make ourselves vulnerable enough to be as funny as possible and real – to tell the story in way that is unique to us as artists.

Tell us a little about your plans for the future.

I have some projects in the works and my writing partner, Deb Knox and I are working toward a production of our new play, “Sorry, Dad”.

Anything else, absolutely anything?

In my spare time I am passionate about animal rescue, and I work with Badass Brooklyn Animal Rescue.

Ticket prices for The Merry Wives of Windsor range from $50 to $70, with discounts available for groups, seniors, and U.S. military personnel, their families, and veterans. A limited number of $20 tickets are available for every performance; $20 tickets may be partial view. Tickets for patrons under 30 are $20 and include the best available seats at every performance. The theater is located at 21 Bridge Street in Red Bank, NJ. Tickets are available from www.tworivertheater.org or by calling 732.345.1400.

The Classic Pippin is Back! 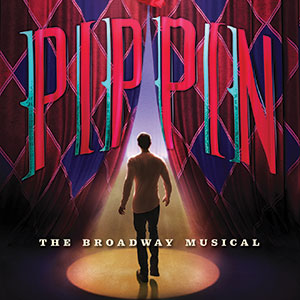 This is Pippin like you’ve never seen it before. The show incorporates sassy choreography in the style of Bob Fosse and exciting circus acrobatics. The big top set and high-flying acrobats add to the spectacle, along with the knife throwing, hula hooping, and gravity-defying balancing acts. The magical score from Oscar® and Grammy®-winning songwriter Stephen Schwartz (Godspell, Wicked), which includes such hits as “Magic to Do,” “Corner of the Sky,” “Morning Glow,” and “No Time at All,” brings the enchanted story of Pippin to life in this tale of a young prince’s search for passion, adventure, and the meaning of life. 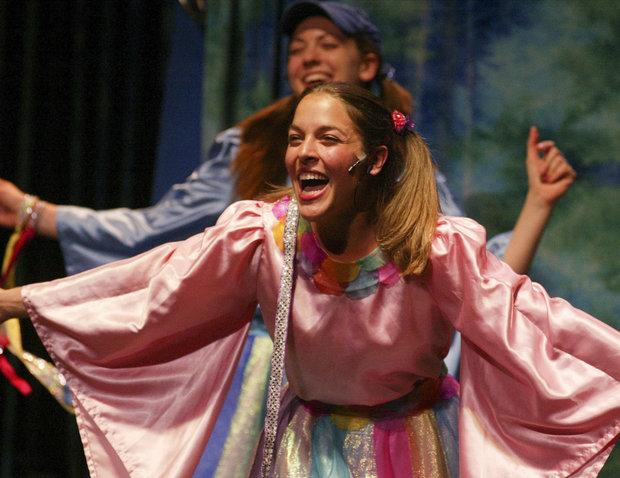 In “The Rainbow Fish,” a brightly-colored sea creature finds friends when he learns to share. (ArtsPower National Touring Theat)

The Mayo Performing Arts Center will host its first “sensory-friendly” performance Feb. 8 — the popular children’s show “The Rainbow Fish” — as it moves forward with plans to become more welcoming to those with autism and special needs.

Following in the footsteps of other local theaters — including Millburn’s Paper Mill Playhouse and State Theatre of New Jersey in New Brunswick — Mayo wants “to make the theater a place everybody can enjoy,” General Manager Ed Kirchdoerffer said.

“This is a great opportunity to let a group of kids who sometimes feel excluded to feel like they’re a part of something,”  Kirchdoerffer said.
It’s a timely move: The Centers for Disease Control and Prevention last year reported that 1 in 41 children  living in the state have been identified with autism spectrum disorder. That’s about 2.5 %. Nationally 1 in 68 children have autism spectrum disorder, about 1.5 percent.

Mayo’s first step towards being more inclusive is a partnership with The Miracle Project, a respected national program that uses music, dance and theater to reach children on the autism spectrum. The non-profit is currently offering two of the project’s courses.

The second is offering sensory-friendly performances like this one. The changes to “The Rainbow Fish” will be relatively subtle: The house lights will stay on during the performance and the sound system will be turned down a notch. Audience members will be welcome to move around during the one-act play or encouraged to take a break in a “chill room” set up for that purpose.

But those tweaks make an incredible difference, said Gary Blackman, managing director of ArtsPower National Touring Theatre company, which produces the show. His company has been producing these sensory-friendly productions for about five years and have seen an uptick in requests for them.

“Adapting the light and sound levels removes something that may be a stimulus, but it doesn’t affect the quality or the integrity of the show at all,” Blackman said. “It’s not as formal as a regular performance, but that’s fine with us.”

At the suggestion of autism experts, Mayo hosted a “Meet Your Seat” open house for ticket holders last week so the theater wouldn’t seem foreign and scary. It also sent out documents with photos of the theater and the auditorium to set expectations.

On the day of the performance, there will be family bathrooms available instead of single sex ones.

“We want to create an environment that’s comfortable for everyone,” Kirchdoerffer said

“The Rainbow Fish” is based on the popular 1992 book by Marcus Pfister.

In the story,  a fish with colorful scales finds friendship when he learns to share and look at inner beauty, not outer appearances. The stage show features illustrations from the book, which excites audiences, Blackman said.

The show’s stated target audience is ages 4 -10, the same age range recommended for Mayo’s second sensory-friendly performance, “The Little Prince” on May 7.

But  Kirchdoerffer stressed that all ages are welcome.

“Sometimes families with a child on the spectrum don’t have as many opportunities to go out and feel included,” he said. “This show is a respite. It is set-up so they  have a place to go.”

All is not right in one upscale New Jersey cul-de-sac: a storm is brewing; marriages are crumbling; and the god of wine, sex and revelry is in town eager to conscript a few followers. These are the conditions that underlie the ambitious world-premiere play “Hurricane Diane,” by Madeleine George — a 2014 Pulitzer finalist for “The (curious case of) Watson Intelligence” — now running at Red Bank’s Two River Theater. Full of quick, funny wit, the play is a comedy with designs on high-minded social critique. 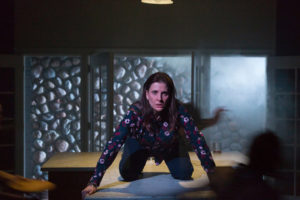 Its success in the latter endeavor is spotty — the play’s late portions run a bit off the rails — but “Hurricane Diane” remains a droll treat and a smart mockery of suburban stasis.

The play opens as Diane (Becca Blackwell), “a lesbian separatist permaculture gardener from Vermont,” announces her true identity of Dionysus to the audience, telling us that the time is ripe to come out of seclusion and gather a train of acolytes. She has deemed New Jersey the spot of prime pickings (the play was a commission by Two River, and George, a playwright in residence at the theater, capitalizes on plenty of opportunities for inside jokes with her Garden State audience).

Her friends are more easily won over than Sandy. But Diane knows she has to get Sandy to achieve achieve a proper cult.

The play is most fun when examining the slow, reluctant departure of these women from their hardline suburban principles. Rachel Hauck’s perfectly minimalist set fills Two River’s black box space with only a kitchen marble countertop and sink, adorned with a few stools and wine racks (we’ve all been in this house: the kitchen is about 400 square feet, and no doubt surrounded by 3,000 gaudy more).

The only marker of when the play moves from one kitchen to the next is the lady of the house’s dish towel of choice. Identical floorplans and neatly manicured backyards suit these women just fine, and so Diane must pull out all the stops to lure them into her natural habitat of paw-paw trees and hedonism. In their resistance, George finds space aplenty to mock suburban ideals.

Obie-winner and Broadway veteran Leigh Silverman directs with an inventive eye for using the space’s minimalism, and original music from the folk/rock duo The Bengsons underscores the ritualism into which the play progresses. Ultimately the play looks quite different at its conclusion than it did ninety minutes earlier, in part because of the natural world imposing itself on the constructed, but mostly because of the spiritual journeys of George’s four women.

Such drastic changes inevitably seem abrupt in a short play, and “Hurricane Diane” doesn’t avoid this pitfall. But the questions that the play’s conclusion asks about human’s relationship with nature and its forces resonate.